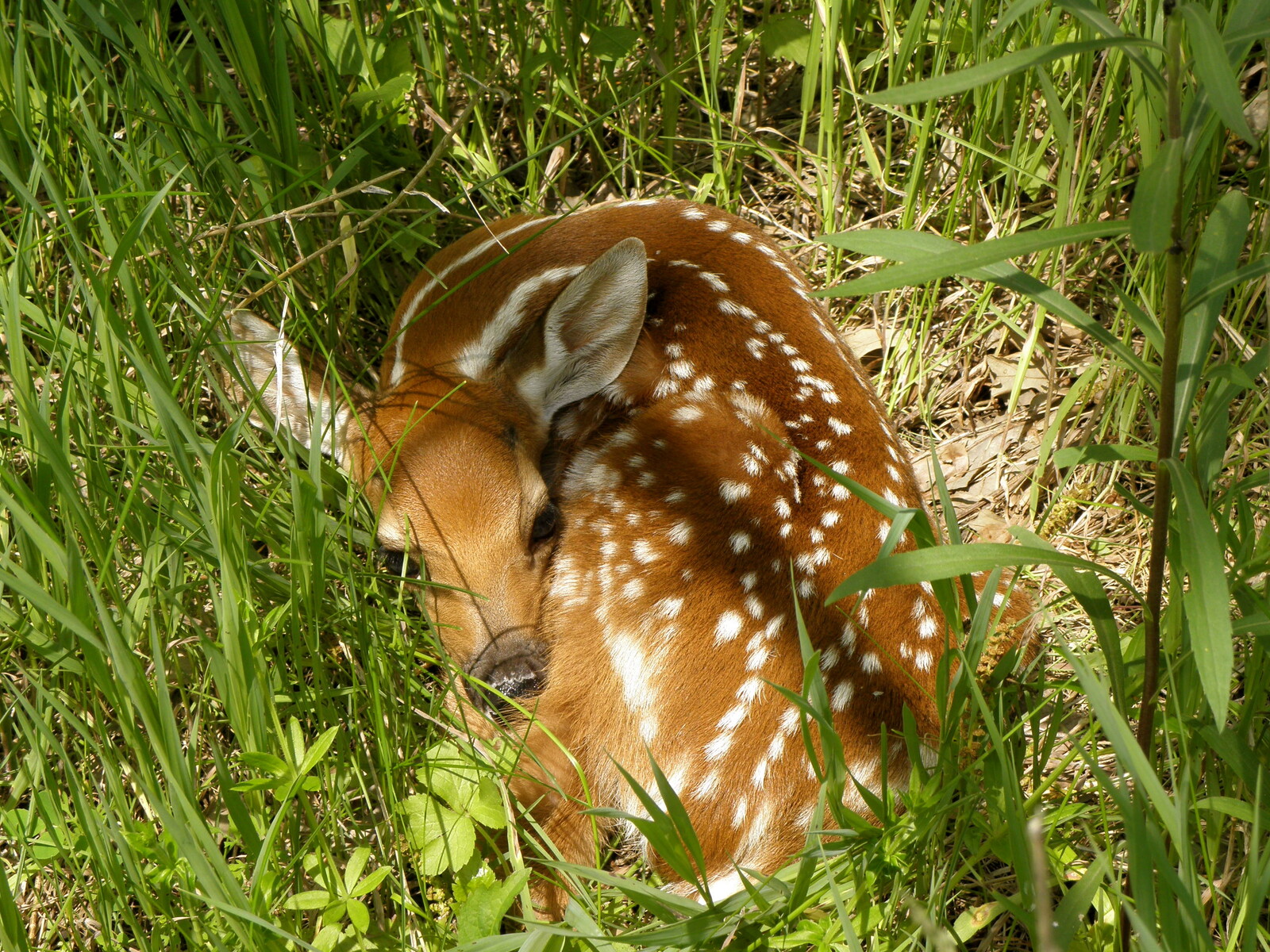 It’s that time again! Those bundles of cuteness are being born in many areas of the south. I had my first newborn fawn encounter of the year, in Louisiana, a few days ago (this being June 4th).

I don’t think there’s a better example of how nature was designed to ensure the survival of a species than the whitetail deer, particularly fawns.  If you don’t believe that, let’s look at all of the built-in defenses that help protect these seemingly easy targets.  A healthy doe will typically have one to three fawns each year, with two being most common.  Interestingly, when she has two or more, each is often sired by a different buck.  Fawns typically will begin to stand and nurse within 30 minutes after birth. As soon as they’re able to walk on wobbly legs, usually within a few hours, the mother will lead them away from the birth site.  There’s too much evidence and odor there for predators looking for an easy meal.  Speaking of removing evidence and odor, a fawn won’t urinate or defecate in the absence of its mother.  They will only do so when stimulated by the doe and she cleans it up. I won’t go into detail but you probably get the picture.  For the first week or two of its life, a fawn will spend the majority of time lying curled and motionless.  These first few days are a critical time and when they’re the most vulnerable.  This is often when people happen upon them and assume they are abandoned.  This usually isn’t the case and they should be left alone.  They don’t need any intervention from us. A doe will rarely abandon her fawn, unless something happens to her.  She’s usually foraging or bedded within earshot and returns two or three times a day to nurse and groom them.  She stays away so she won’t draw attention to the fawn’s location.  A doe with twins will separate them.  I assume this is done to avoid loss of both, if one is found by a predator.  I’ve read that a fawn has a very rapid heart rate, even at rest, until it senses danger.  Then, as it’s bedded, it drops its head, lowers its ears, and its heart rate falls dramatically.  Its breathing will then become slower and deeper.  This is all to avoid detection.  In a few days, it will begin to follow its mother around. Though it will still spend a lot of time sleeping, it’s now learning to communicate, getting familiar with its surroundings, and starting to select its own bedding sites.  Its legs are now getting stronger and, within about three weeks, it’s fast enough to escape most any danger.  It will also begin eating vegetation at about three weeks of age, figuring out which plants are more desirable than others.  As the days pass, it will get stronger, begin to frolic around, and develop an understanding of its place in the herd.

The first few months of a fawn’s life are a daily struggle for survival.  So what can we do in order not to make their life more stressful than it already is?  Be mindful when mowing.  It’s a newborn fawn’s instinct to hunker down and lay still, even when something loud is approaching.  This makes them very vulnerable to mowing.  Tall grass and brushy areas are prime fawn habitat.  The only things I mow from mid-May to August are my yard and maintained trails.  Even when doing that, I keep a watchful eye open.  If I absolutely have to mow something like a food plot, I always walk it first.  Do not disturb!  If you walk up on a fawn lying down and not moving, don’t disturb it.  It most likely hasn’t been abandoned and there’s nothing wrong with it.  Remember, a newborn’s instinct is to not run. Take a picture, enjoy the sight, and move on.  It’s best to never touch a fawn but if you see one directly in harm’s way, it’s okay to move it a short distance.  Just because a human touches a fawn doesn’t mean the doe will stop taking care of it.  The idea that does abandon fawns if they’re touched by humans is simply not true.  However, that doesn’t mean it’s okay to give it a bottle and try to make it a family pet!  Place it a short distance away, in the shade, where it will be safe.  If it gets up and runs off, don’t chase it.  It will likely travel a short distance and pick a spot to lay down and wait for its mother.

Very few things in nature are as beautiful as a newborn fawn.  I look forward to their arrival, each year, just as much as I look forward to those velvet antlers appearing on their father’s heads.  Whitetail deer, both young and old, are amazing animals.