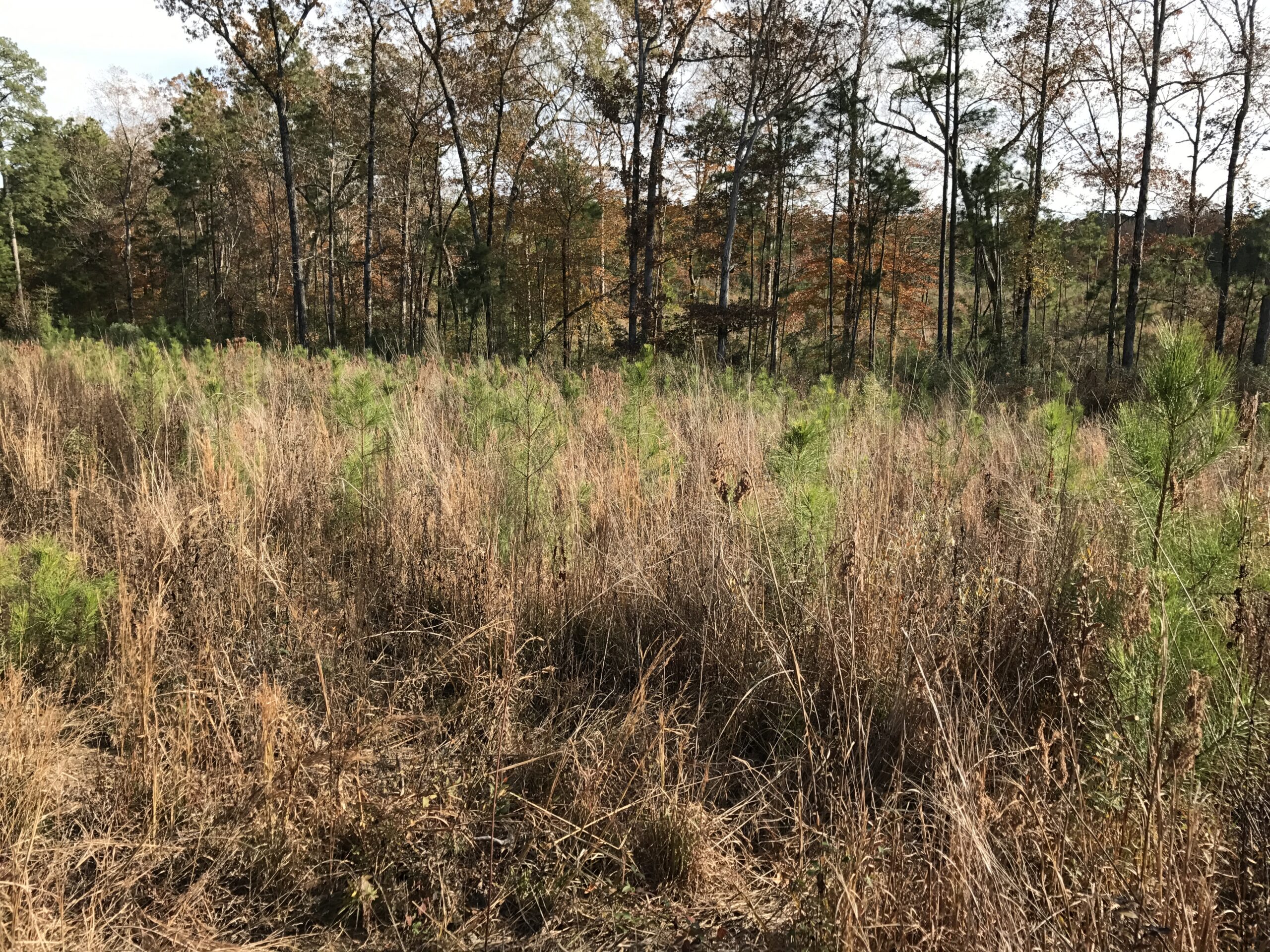 This post will discuss managing wildlife habitat in pine plantations.  My primary focus will be on deer but many species benefit from this intensive management, especially turkeys.  I estimate that more than half of our forests in the upland portions of central Louisiana are pine.  Many believe that a pine stand managed intensively for timber production can’t produce quality deer habitat and, with so many acres of it, many sportsman are afraid wildlife habitat has been destroyed.  As I stated in the last post, I actually prefer to manage wildlife habitat in pine stands over hardwood.  However, the debate over hardwood and pine is not the most important issue.  It’s all about how we manage our timber stands.  The key is to use a management strategy that not only provides you with an economically viable timber stand but also provides wildlife with quality habitat.

A few terms you’ll hear me use often are overstory, understory, plant succession, and disturbance.  All are important in combining timber and good wildlife habitat production.  The overstory is our cash crop, in this case pine trees.  The understory is what’s growing underneath the pines.  We have to intensively manage both and, in fact, managing the understory is the key to having good deer and turkey habitat.  Everyone manages the overstory when they periodically thin their timber but its rare today to see the understory controlled and managed.

Plant succession simply refers to the progressive change in the plant community.  If you harvest all the timber on a tract of land here in the south, the first plants to grow back are grasses, forbs, and shrubs.  A few common examples here in Louisiana are broomsedge, greenbrier, honeysuckle, ragweed, beggar’s-lice, goldenrod, beautyberry, and blackberry.  Over time, without continued disturbance, these plants are outcompeted and start being replaced by trees.  Given more time, the trees mature and shade out the early succession plants.  This is forest succession in a nutshell.  As wildlife managers we are, in one form or another, constantly fighting back succession because the early plants offer the best food and cover for deer, turkeys, rabbits, and a multitude of other wildlife.  Remember, a deer’s world is from the ground up to about four feet high.  They are early succession animals.  The longer we can provide early successional habitat, the more they are attracted to our property.

So how do we control plant succession?  We do so by disturbance.  Disturbance can come in several forms.  There are catastrophic disturbances such as damaging wind, wildfire, and even insect outbreaks such as southern pine beetle.  Many years ago, they came in the form of great herds of buffalo moving across the plains or Native Americans setting fires to reduce “rough” vegetation, improve hunting, and create space for crops.  Today we create disturbances by harvesting timber, prescribed burning, and directed use of herbicide.  In the above paragraph, we started the succession process off by harvesting timber.  You simply can’t keep vegetation at a deer’s level without disturbing it or setting it back.

So, how do we grow pine trees and, at the same time, create disturbances to promote early successional habitat?  We manage the overstory and understory almost as separate components.  Once the pines grow to pulpwood size, we open (thin) the overstory enough to allow sunlight to reach the forest floor and promote the growth of the understory.  Then we manipulate and manage what grows there and keep it in reach of deer.  Simple enough, right?  The problem, as it relates to pine plantations and wildlife habitat, is when the understory isn’t managed.  We’ve got the timber harvesting part down (a lot of you are saying “AMEN” or something worse right about now).  Where we fall short is in managing the understory between harvests.  There are countless acres of pine stands where the understory is 10-12 feet tall and choked with yaupon, privet, saw briar, and hardwood saplings.  Most of the sparse nutritious food that’s out there isn’t even within a deer’s reach.   This is not good wildlife habitat and is a big reason deer sightings and hunting success falls off when a pine stand reaches this stage.

I believe one of the biggest problems in our pine forests today is, for various reasons, most landowners have by and large stopped using prescribed fire as a management tool.  A controlled fire is by far the best means of manipulating wildlife habitat in a pine stand.  Dollar for dollar, it’s the most cost-effective tool we have.  I’ll give a more in-depth discussion of prescribed fire in another blog post.

Now let’s look at the life cycle of a pine plantation and see that timber and wildlife management doesn’t have to be an either-or proposition. Plantations go through several stages and the wildlife habitat is constantly changing.

The first stage is site preparation and planting. All the timber has been removed and it’s time to start over. A herbicide application, often followed by prescribed fire, is normally the first step and is vital for getting the seedlings established. This not only makes the site suitable for planting, it increases the survival and growth rate of the seedlings by holding back the explosion of woody growth and grasses that would compete for sunlight, nutrients, and water. Once the site is prepared, seedlings are planted, usually at a rate of between 620 and 680 trees per acre.

From age one through about eight or ten, ample sunlight is providing the optimum condition for beneficial wildlife foods to grow. Plantations that have intensive site preparation treatments may not start producing much deer forage until the second year.  While chemical site preparation reduces the amount of woody browse plants, their absence leaves room for higher quality fobs, vines, and shrubs.  These foods will continue to grow and cover will thicken until the pines reach the size where their crowns begin to close and reduce the amount of sunlight reaching the forest floor.  This stage of the pine plantation provides quality habitat for a wide variety of wildlife.

The next stage occurs around year ten, when the crowns close and tree growth slows dramatically.  The herbaceous growth that has thrived and provided wildlife with food and cover starts to diminish until basically all that’s left on the forest floor is pine straw. In terms of both timber production and wildlife habitat, this is the least productive stage.   It may last from two to five years, depending on how long it takes the pines to reach merchantable size. The problem is that there aren’t many options for improvement.  A prescribed burn can be conducted but, at this stage, the risk is almost greater than the reward. Though a low-intensity fire would help the pines, it would do little to improve wildlife habitat at this point.  Therefore, all we can do is wait until the trees are large enough to thin.  I’d like to point out that having relatively small areas of closed-canopy young pine stands is not a bad thing.  This type of habitat provides thermal cover and offers deer an opportunity to get some shelter from the cold rain and hot sun.  The problem lies in having vast acreages of plantations in this stage.  Too much of anything is usually bad.  Deer love soybeans but a field of several hundred acres doesn’t make good habitat.

Usually by age 12 – 15, the plantation is ready to be thinned for the first time. I have seen a few exceptional stands reach merchantable size as young as 10, but they are the exception. Most first-thinnings are done by cutting every fourth or fifth row and then thinning in-between.  The crown spacing I recommend depends on the landowner’s objective.  If timber production carries more or equal weight to wildlife, I’ll recommend a nice even crown spacing where there’s a little daylight between each tree crown.  If deer habitat is the primary objective, I’ll recommend opening the canopy up a little more.  After the timber is thinned, we’ve now entered the most productive stage as far as wildlife utilization goes.  Management options for the understory are wide open.  Prescribed burning, mentioned earlier, is extremely beneficial during this stage. It can be used to set back plant succession and improve wildlife food.  I let the understory growth dictate when to burn but it’s usually done every three to five years. Other practices can be used, such as an aerial fertilizer application, which can improve the growth of the timber as well as the production of beneficial native vegetation in the understory.  Strip disking the cut rows from the timber harvest can stimulate a diverse plant population to feed wildlife.  Herbicide can be used in a variety of ways to remove unwanted hardwood species such as sweetgum and Chinese tallow.

As the pines grow, in response to the thinning, their crowns will start to close once again.  Depending on the quality of the plantation and logging access, I normally recommend thinning a second time as soon as the crowns touch.  After thinning two or three times, the stand will be ready for a final harvest and the process is started over again.

As stated earlier, from the time a plantation is thinned the first time, you can almost manage the overstory and understory as separate components.  The overstory is where the money is and the understory is where the deer and turkeys are.  It doesn’t get much better than that. The timber is regularly thinned to keep it growing and increasing in value.  The understory is regularly manipulated to set back plant succession and maintain productive wildlife habitat.  Over the entire life of a pine forest, only a few years should actually be in the dense, dark, unproductive stage most people associate with a pine plantation.

If you take a proactive management approach, pine plantations can offer deer and other wildlife a tremendous amount of forage and quality habitat.  To do it right however, there’s more to it than just cutting timber.